Demand for critical minerals will rise in the coming years as renewable energy technologies develop and governments position the energy transition at the center of national strategies. We assessed the emerging political and regulatory risks across supply chains for these minerals.

The World Bank estimates that production of critical minerals – including lithium, nickel and cobalt – could increase by nearly 500% by 2050 to meet growing demand for batteries and other renewable energy technologies. According to the International Energy Association (IEA), some minerals will see exponential growth in demand, including lithium (for which demand could increase 40-fold), graphite (25-fold), and cobalt and nickel (20-fold). Surging demand for raw materials could slow or reverse a rapid decline in clean energy costs in recent years. Newer battery technologies are utilizing critical minerals in higher quantities. For example, older lithium-ion batteries for electric vehicles (EVs) used cathodes comprised of around one-third nickel, whereas newer versions use about 60%, increasing energy density and EV range. Cathode materials – such as manganese, nickel, and cobalt – now account for more than 20% of battery costs, up from 3.5% a decade earlier, even as overall battery costs have fallen. Over the same period, the number of so-called “gigafactories” manufacturing batteries for EVs has risen to around 300, according to the IEA. As global demand for EVs, and therefore for lithium-ion batteries rises, so prices for critical minerals are likely to increase. 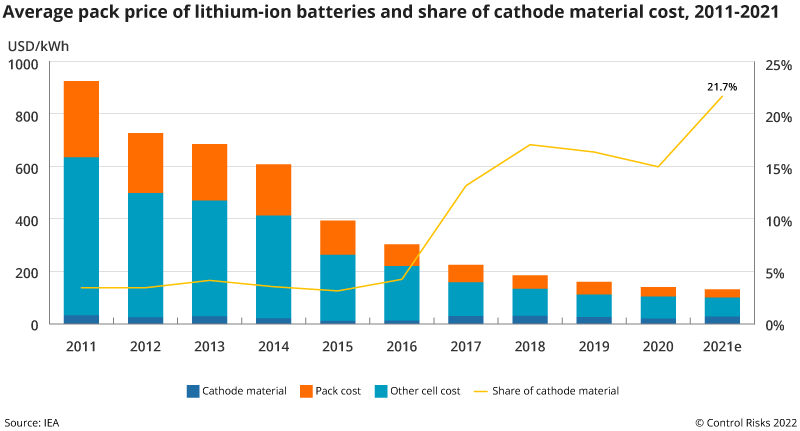 The concentration of critical mineral deposits in a small number of countries increases the likelihood of regulatory, political, and operational risks disrupting supply chains.

In Latin America, the so-called Lithium Triangle (Chile, Argentina, and Bolivia) has the world’s largest reserves, with more than half of the world’s total. In Bolivia, extraction remains largely limited to small projects given technical difficulties associated with lithium extraction, overly restrictive government policies, and the lack of technology at the national level. In Argentina, the government has actively worked to attract mining investors. However, persistent regulatory fragmentation across provinces will continue to pose political and regulatory risks for the mining industry associated with compliance.

Chile is a regional leader in terms of exploration and operational capacity. However, regulatory risks will persist under new President Gabriel Boric. The government in June announced the formation of a state-owned firm to exploit lithium (a likely lengthy process), in line with the resource nationalism rhetoric espoused by Boric. This approach will likely increase discrimination in favor of the state-owned company, undermining the until now private-sector-led development of the industry. Nonetheless, Boric will struggle to push his initiative through Congress (legislature), which is very likely to water down the most ambitious elements of his agenda.

In recent years, many countries with substantial resources of critical minerals have sought to increase economic returns from the mining industry. In sub-Saharan Africa, the government of Congo (DRC) in late 2018 increased cobalt royalties five-fold to 10%. In Burundi, which holds reserves of rare earths and nickel, the government in 2021 suspended activities at several mines and is updating its mining code to increase fiscal returns.

Governments are also increasingly insisting on local value addition. Guinea’s transitional government in April ordered companies to present a timeline for the construction of bauxite refineries, though no companies have yet complied. The government is highly likely to carry out a review of mining agreements in the coming months.

Meanwhile, both Congo (DRC) and Zambia want to use cobalt production to develop an African electric battery value chain by investing in mid- and downstream capacity. This will consolidate battery production in these countries, shortening supply chains. As a result, foreign companies there will likely face increased localization requirements over time.

The Ukraine conflict has highlighted the potential for geopolitical risks to drive significant disruption in the mineral markets. Russia is a key producer of critical minerals, especially those needed for the renewable energy transition. It produces around 20% of the global supply of Class 1 nickel – containing at least 99.8% nickel – while it is the second-largest producer of cobalt and fourth of graphite, according to the World Bank.

Amid the related sanctions and widespread operational disruption caused by the conflict, prices of some metals have surged in recent months. At the London Metal Exchange (UK) on March 8th, a key investor sought to secure nickel supply, ultimately leading to a self-reinforcing price spiral prompting the exchange to suspend trading the same day. The price of nickel soared from roughly $29,000 per metric ton to $100,000 between March 4th and 8th. On reopening, nickel prices balanced out at around $50,000 per metric ton. Prices have since eased further, though remained around 66% higher in the second quarter of 2022 than in the same period in 2021.

Nonetheless, South-East Asia in particular is poised to make the most of growing global demand to secure new raw material markets and augment global supply chains. Indonesia will account for more than half of global nickel production growth between 2021 and 2025, making it a crucial player in the global transition to cleaner energy. The country also has 7.5% of the world’s known reserves of copper, more than 13% of those of tin and 4% of the world’s known gold reserves. Elsewhere in South-East Asia, Malaysia is a leading tin exporter, Myanmar a major copper producer, and the Philippines a substantial copper, nickel, and gold exporter.

Rising demand for minerals will drive a growing likelihood of resource nationalism and regulatory restrictions. For example, Indonesia in 2020 banned export of nickel ore to develop its domestic processing capacity. Most recently, the government is expected to impose an additional tax on nickel pig-iron (NPI) in the third quarter of this year. This comes as exports have mushroomed in recent years – Chinese imports of NPI rose by 45% in the first six months of 2022 compared with 2021. Refining and manufacturing companies will also likely face increased entry barriers. The Indonesian government is currently debating whether to cap the number of NPI and ferronickel plants – the number will almost double in the next five years.

China currently dominates the mid- and downstream lithium battery supply chain. It accounts for 60% of the world’s lithium refining and three-quarters of lithium-ion battery production. However, the country continues to rely heavily on the import of lithium raw materials, particularly spodumene from Australia. To mitigate threats of external disruption, China has sought to tap domestic lithium resources, including lepidolite and salt-lake brines, by promoting domestic exploration. However, most of these reserves are low in lithium content, and extraction is challenging with existing technologies. A significant increase in domestic production remains unlikely in the next two-to-three years, exposing China to supply chain risks in the short term. Ongoing curbs on energy consumption in China’s carbon-intensive sectors such as aluminum and copper production will also disrupt production in the coming years.

The strategic importance and concentrated supply of critical minerals are encouraging Western governments and private companies to actively seek trade alliances and partnerships to reduce threats to supply chains. Having focused on critical minerals since the 1990s, but spurred more recently by the COVID-19 pandemic and rising tensions with China and Russia, the US is at the forefront of establishing “trusted” supply chains among partners and allies. Most recently, in June, it helped to launch the Minerals Security Partnership, a consortium of Western allies and security partners that aims to increase investment in critical minerals and bolster supply chains, while presumably earmarking output for Western manufacturers. The US, in 2021, produced just 0.7% of the world’s nickel and 0.4% of its cobalt.

Critical mineral supply is increasingly being included as a core pillar in national security strategies. The UK on July 4th, announced a new body, the Critical Minerals Intelligence Centre, to analyze the supply of critical minerals due to their essential role in products for “green technologies, national security, and daily life – such as electric vehicles, wind turbines, mobile phones, and fighter jets”. It followed up with its first Critical Minerals Strategy on July 22nd, outlining a plan to secure supply chains, boost domestic capabilities, and attract investment in the industry.

As governments accelerate plans to decarbonize their economies, demand for, and the strategic importance of, critical minerals will grow, driving elevated political, regulatory, and operational risks along critical mineral supply chains. Surging food and fuel prices and high inflation rates will further increase the likelihood of resource nationalism as governments aim to alleviate economic pressures and the threat of unrest by raising funds through the extractives industry, increasing tax and contract risks to projects. As they review their supply chain exposure, companies should factor in these emerging regulatory and political risks.

Seerist, Inc. enables global corporations, governments, and organizations to navigate a volatile and uncertain world by preparing them for potential events that could be highly disruptive to their operations. Seerist is the first augmented analytics solution for risk and threat analysis, delivers greater levels of accuracy and relevance than any alternative technology or service. It combines cutting-edge artificial intelligence (AI) and machine learning (ML) technology parsing millions of data points with human analysis drawing on decades of insight enabling users to better predict what will happen allowing them to make rapid, strategic, and reliable decisions when it matters most. To learn more, visit www.seerist.com.

Read more of the good stuff.

How to Set up a Risk & Threat Solution for Implementation Success The World Cup is Here: What to Expect

Through Seerist’s strategic partnership with Control Risks, the Seerist solution offers on-the-ground insight from an analyst ahead of the FIFA World Cup, which is held